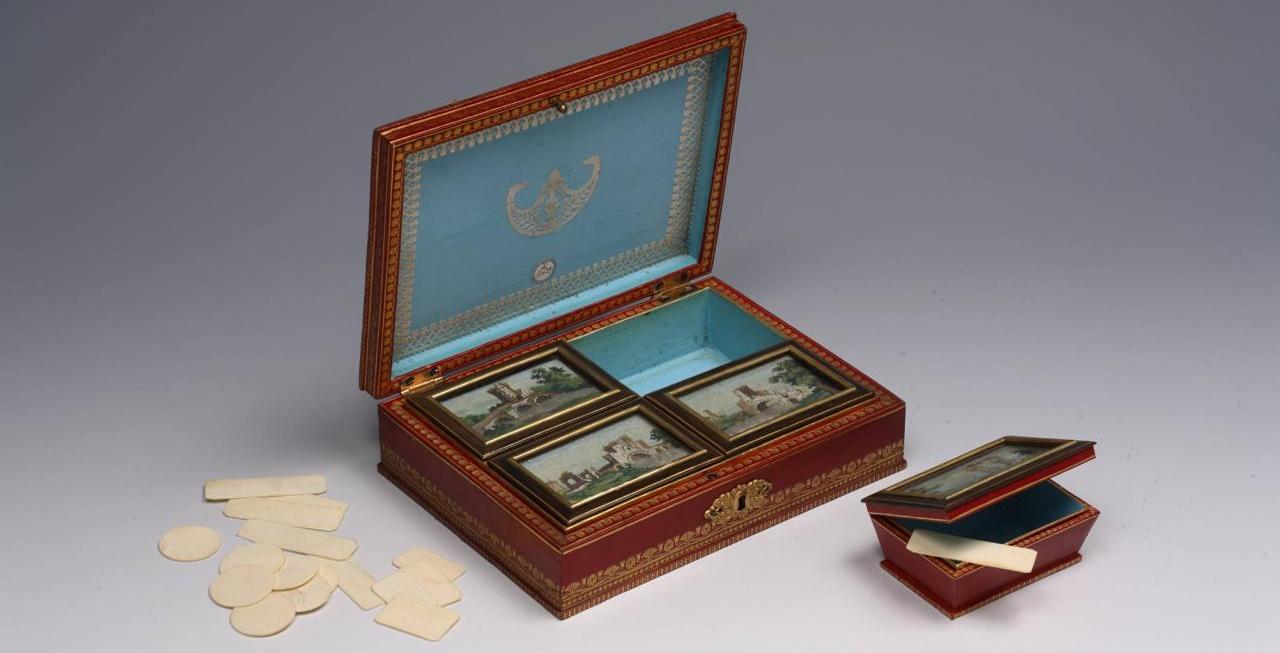 The material playthings used by children and young people in the 19th and 20th centuries provide information about the playful appropriation of the world at different times. The collection was mainly created by generous donations from Frankfurt citizens and makes it possible to identify societal preferences. The collection also includes objects used to entertain adults.
Doll’s houses from (upper) middle-class families form an exquisite part of the collection. The doll’s house from the Gontard family (ca. 1800) and the doll’s theatre from Johann Wolfgang von Goethe (on permanent loan in the Goethe-Haus) are just two of the valuable items in the collection. Even the historical board games from the 17th and 18th centuries are captivating, with their diverse materials and artistic finishes, and are an important component of cultural history – not just of Frankfurt’s.


As well as functions as learning toys or as an aid for practicing gender roles, the pieces also represent the respective social eras. Objects such as shops, building and construction kits, (technical) models, miniature vehicles, model trains, children’s vehicles, playhouses and toy animals, dolls, doll’s houses and kitchens, board games, metal and wooden toys or optical toys tell the story of the arising mechanisation of society as well as the differentiation of socio-cultural life. Most of the objects stem from middle-class and rather wealthy households. Some of the objects were manufactured neither serially nor industrially: the individual pieces which were manufactured according to the families’ own visions convey contemporary aesthetic visions.

Toys from times of war and need

The toys from times of war and need is a special feature of the collection. Children’s worlds of play during the war and the post-war period are rarely documented; self-manufactured toys can hardly be found anymore. Thanks to the support of the Koebe Foundation in 2009, the museum was able to acquire a rare toy collection which describes childhood in Germany during and after the Second World War. Tin figurines can also be found in the collection of the  Historisches Museum Frankfurt . Tin figurines were the most widespread toy for boys in the 19th and the early 20th century. The figurine sets in the museum do not refer to military events, but rather thematise city events such as the Schützenfest of 1862, which is presented in the “Frankfurt Then” exhibition.

The “Walter” collection found its way to the museum in the 1980s. The biographical estate documents childhood and youth during National Socialism in Frankfurt. This also includes war toys such as armoured cruisers or Elastolin figurines. The estate was part of a larger research project on youth during National Socialism and is partially exhibited in “Frankfurt Then?”.
Wooden toys
A special collection of traditional wooden toys are tied to supra-regional collections with folk-art pieces: the collection contains wooden toys from Berchtesgaden, the Gardena Valley, the Ore Mountains and Thuringia (donation), consisting of brightly painted wooden dollies, puppets and Christmas tree decorations.
Present
Since the 1980s, the collection has been expanded through targeted acquisitions and donations of items related to everyday life. However, for space reasons this expansion will not be continued at present.