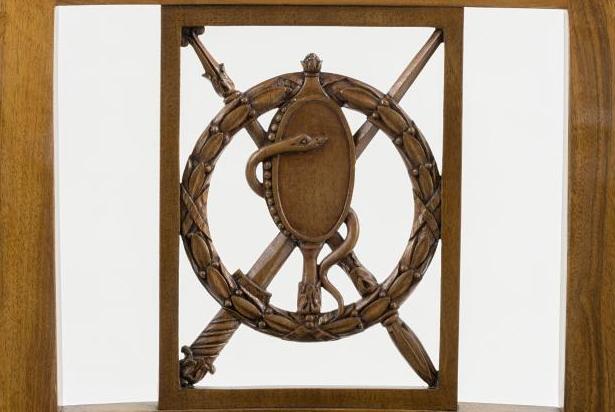 Furniture – a central aspect of domestic life – can be found in all museum collections characterised by cultural history. As a material “object culture” of daily life in Frankfurt, the collection of the Historisches Museum sheds light on the lifestyles of middle-class families in Frankfurt. It spans a large period, demonstrating a diverse range of household,  representational and work furniture from the 17th century right through to modern design objects.
The collection includes around 1,500 individual pieces. The 18th and 19th centuries are a main focus; however, the 20th century is also represented through various prominent pieces. In terms of justification for addition to the collection, the link to the history of Frankfurt was as decisive as the fact that the pieces are handcrafted works of art. The earliest furniture accruals housed in the museum include the construction of the so-called Friedenszimmer (“peace room”) in the Hotel zum Schwan in 1882 in Frankfurt, where Reich Chancellor Otto von Bismarck and French Foreign Minister Jule Favre signed the “Treaty of Frankfurt” on 10 May 1871 between France and the newly founded German Empire.
Frankfurt cabinets
A particular speciality in the Historisches Museum is the large number of Baroque cabinets, which had an impact on European furniture history as what are known as “Frankfurt cabinets”. This collective term is used for different kinds of cabinets (freestanding cabinet, pilasters cabinet, Wellenschrank, Nasenschrank, Stollenschrank) whose production can be traced back to the Frankfurt guild of cabinet makers under the name Schreiner. The significance of Frankfurt cabinets is not simply due to the manual ingenuity and artistry of the master carpenter; they also refer to the dynamics of a strong craft guild which had to meet the demands for luxury of a wealthy township in the city of trade fairs and coronations.
The Frankfurt kitchen
In recent furniture history, the “Frankfurt kitchen” is surely another special feature of the Main metropolis. Austrian architect Margarete Schütte-Lihotzky developed this precursor of today’s fitted kitchen, which was aimed at more efficient housework in a time where more and more women were going to work. Her invention was developed and built on the initiative of Frankfurt architect and city planner Ernst May in many variations. As of 1925, the standardised kitchen was a permanent component in the flats of the “New Frankfurt” residential areas drawn up by Ernst May.
Furniture from famous Frankfurters
The collection contains special individual objects to boot, such as the art chamber cabinet of the Barckhaus family which is presented in the Collector’s Museum, one with plastic figures and ornamental trophies from the Günderrode family, small cabinets from the Renaissance and Baroque periods and an interesting group of model furniture – all of them handcrafted treasures of early furniture.


The Gans and Weinberg industrial families were closely connected from the 19th century onwards; both were responsible for the rise of their company Cassella, which became the largest manufacturer of synthetic dyes worldwide. Since 2015, two pieces of furniture which were owned by both families have belonged to the collection – a Renaissance chest table from the Weinberg family and a cabinet from the Gans family.