The new exhibition house boasts around 4,000 square metres of exhibition space across four floors. It is the heart of the museum’s new building. The entry to the exhibition house is on floor 0. This is on the same level as the large foyer under the museum forecourt and directly next to the Snow Globe. Visitors can also reach the room for large special exhibitions from here.  It measures nearly 1,000 square metres and provides the perfect setting for exhibitions. Visitors can reach the upper levels (levels 1 to 3) via a large stairwell and a lift.  The stairs are double-turn, the same as a pair of scissors.  The permanent exhibition on the history of the city is shown across two floors (2,000 square metres): It is called “Frankfurt Once?” (Frankfurt Einst?). It is divided into five major theme galleries: Townscapes, 100 x Frankfurt, Citizens' City, Money Town and Global City. In the attic, with its two gable windows, you will find the “Frankfurt Now!” (Frankfurt Jetzt!) exhibition. Here, visitors can explore present-day Frankfurt. The CityLab can be found here, too. The museum shows exhibitions here that change on a regular basis. They are created in cooperation (participation) with the citizens of Frankfurt. There are spectacular views from above: A large bay with panorama windows and 84 small windows offer breath-taking views of the city.


The concept for the new-build

In January 2008, architecture firm Lederer Ragnarsdóttir Oei Architekten (Stuttgart) won the international competition for the new Historisches Museum. Their design opens the large museum areal with an inviting outdoor staircase and a new square. It thus ties in with the fragmentation and the streets of the Frankfurt Old Town before the destruction of the war. The smaller of the two new-builds is built onto the historical Saalhof and thus makes the whole ensemble one again. This is how it was in the past, which can be seen clearly in the Old Town model by the Treuner brothers. The large exhibition house is spread out behind the Nikolaikirche at the south end of the Römerberg, set back slightly. Thus, a genuine view of the Rententurm (Toll Tower) and the Main riverbank can be enjoyed from the Römer. The two new bulidings together form the new museum forecourt. The Museum Quarter’s two new buildings are connected to one another under the museum forecourt. In the entrance building between the exhibition house and the old Saalhof building, two glass passages on the left and right-hand sides of the Staufer port lead to the exhibitions in the old building. Under the museum forecourt there is a large foyer with important service facilities (cloakroom, toilets, Museum Café, etc.) and a very special attraction: the Snow Globe. The facade of the new building is made of Main sandstone, basalt and natural plaster. These are all materials which are characteristic of the Old Town. Even the saddle roofs covered in natural slate compliment the historical buildings of the Old Town, such as the Römer, the cathedral and the Karmeliterkloster. Building commenced in March 2012. 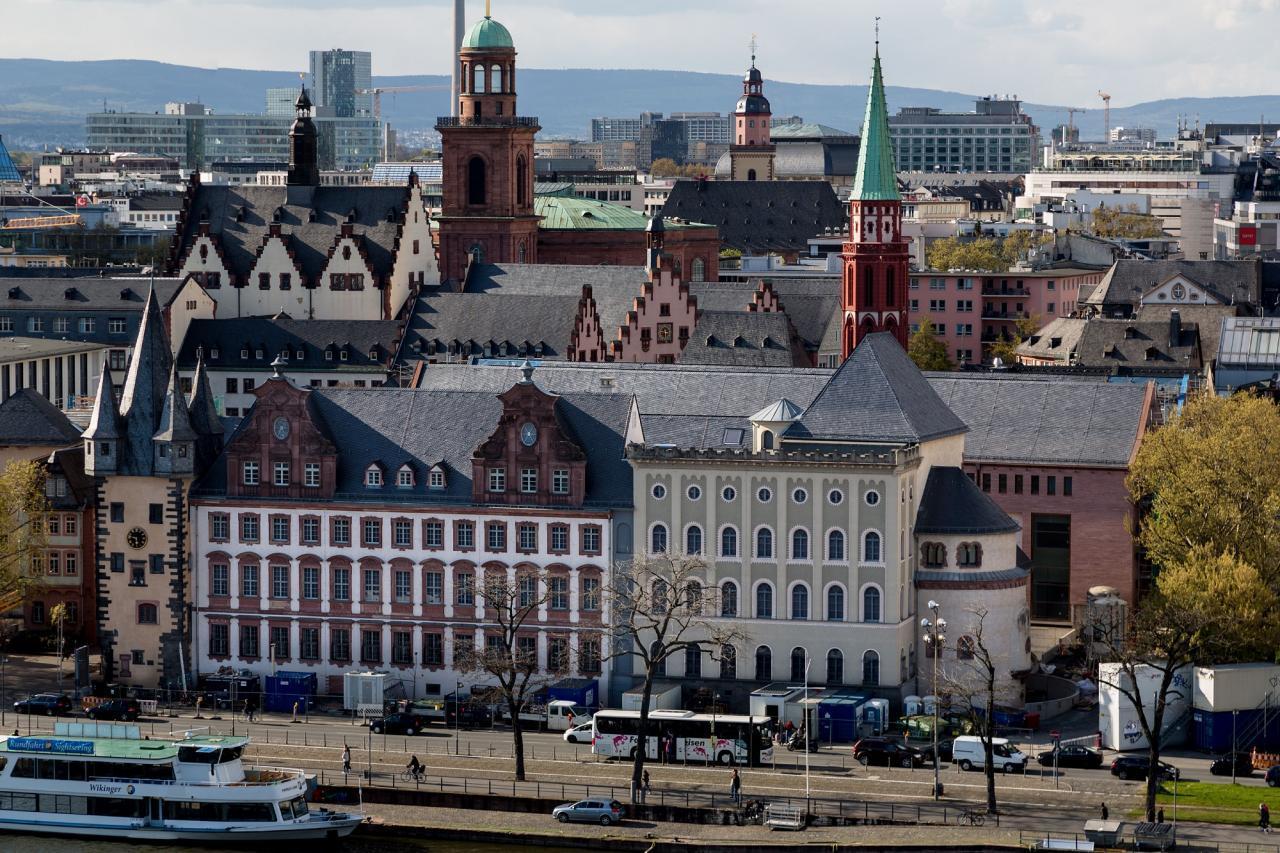 The Old Buildings: The Saalhof Ensemble

The Saalhof tells the city´s history: with five buildings from eight centuries

The Saalhof is unique in Frankfurt. Today, it includes five buildings from 800 years. Originally, all buildings between the old Saalgasse (one of the oldest streets in the Old Town) in the north, the city gate (Fahrtor) in the west, the Main riverbank in the south and the small Saalhof in the east were identified with it. The five monuments of the museum, which are still around today, were restored thoroughly from 2008 to 2012. This followed the concept of Diezinger Architekten (Eichstätt). The concept emphasised the historical character of the five buildings, both in its interior and exterior design. The oldest building of the Saalhof is the Staufer royal castle from circa 1200. It is the oldest upright standing building in the city. This is why it was so carefully restored. The installations of the 20th century were removed and the foundation walls from the Middle Ages (1200-1500)  were exposed. On the inside, the mighty tower house that reached from the basement to the roof was made visible once again. Around 1842, architect Rudolf Burnitz had renovated the tower as a residential building. Following the destruction of the Second World War, the medieval tower was restored on the outside but not on the inside. Traces of the medieval construction almost completely disappeared when it was converted into a museum building. The tower space – which is almost six metres high – has been reconstructed on the ground floor.

A chapel was built onto the eastern wall of the Staufer tower shortly after 1200. Another floor was added soon after. The chapel thus has a total of three floors. The basement was originally only accessible from the main room through a narrow hatch. This was typical of the multi-storey chapels in royal castles of the 12th and 13th century. The basement was presumably used as a vault for storing the imperial treasure. Until the 15th century, kings always took their imperial treasure with them on their travels. This treasure was of a religious nature and contained many holy relics. This is why it was stored in a church room. Today, the copies of the imperial insignia are exhibited there.


Aside from the Staufer royal castle and chapel, the Saalhof is made up of the following components: the Rententurm (Toll Tower) from the mid-15th century, the Baroque Bernuspalais from the early 18th century and the historical Burnitzbau and the customs house from 1842.

The Rententurm on the western side of the ensemble is one of the few towers that have been preserved from the late Gothic town fortification. It was built between 1454 and 1456 by Eberhard Friedberger. For the first time in its 500-year history, it has now been opened to the public via a Gothic spiral staircase. The concrete ceilings from the 1950s were removed from the interior and replaced by steel levels, which allow visitors to look through all floors. This landmark at the Main riverbank provides the most spectacular views over the city and river.

Between the Rententurm and Staufer building, there are two residential buildings on the foundations of the city wall from the Late Middle Ages. Wool and cloth traders Heinrich and Johann Bernus had the Bernusbau built from 1715 to 1717, perhaps by architect and Cistercian Bernardus Kirnde. Banker Jakob Bernus (1681-1749) presented his large painting collection here. A large window now enables a view from the Bernusbau to the neighbouring Rententurm. To the east of the Bernuspalais, Constantia Margaretha Leerse (née Bernus) commissioned another representative residential building in 1842. Architect Rudolf Burnitz (1788-1849) designed the facade of the Burnitzbau – which was named after him – in a Neo-Romanesque style. The shallow depth of the foundations was expanded by the inclusion of the Staufer building, resulting in the disappearance of the south-western edge of the tower. The restoration makes these tower walls in the Burnitzbau visible again. Visitors can access the house via a historical spiral staircase. The customs house on the western side of the Saalhof ensemble originates from the same time. The Neo-Romanesque construction replaced a Classicist building and the city gate (Fahrtor) from the Late Middle Ages at the southern entrance to the Römerberg. On the upper floor, the Gothic oriel was used as spolia and built into the city gate (Fahrtor). 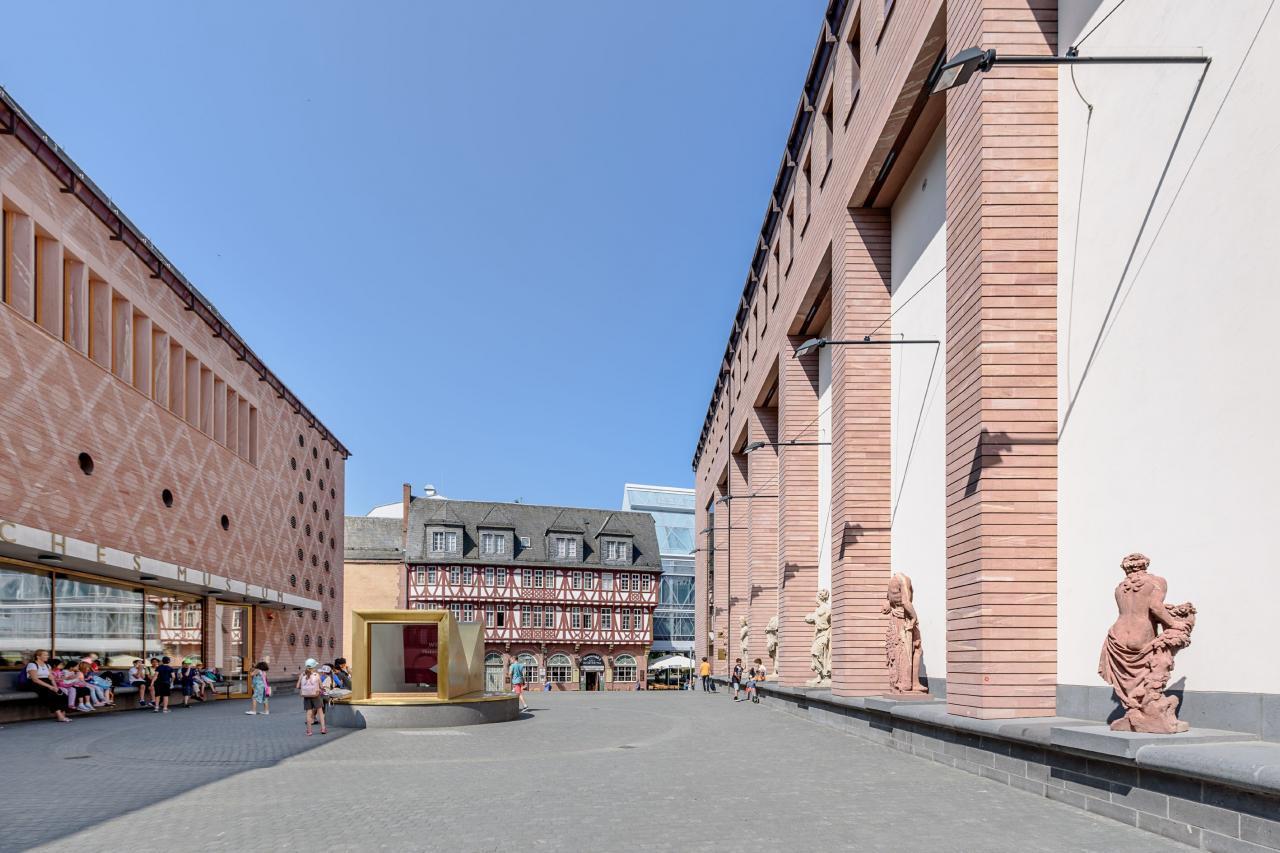 The Museumsplatz is the heart of the new Museum Quarter

Pedestrians can cross the square day and night, allowing them to be in the middle of the museum without having to pay admission. From here, visitors have impressive views of the Haus Wertheim in the west – the only timbered house still in existence in the Frankfurt Old Town – and the Staufer building in the east, the city’s oldest upright standing monument, dating back to the 12th century. Even the archaeological finds near the Staufer building can be easily seen from here. A sculpture gallery with pieces from houses and gardens in the Frankfurt Old Town and New Town (17th-18th century) are already a good introduction to the theme of the museum. The new central entrance of the museum can be reached from the forecourt through two large doors. The striking diamond facade of the entrance building catches the attention of passers-by – even from afar. The five old buildings of the Saalhof can be reached from here at ground level. And underneath the forecourt lies the connection to the large, new exhibition house: The second, lower foyer of the museum. The cloakroom, museum café and toilets are situated here and the Snow Globe – one of the museums's highlights – is located in the middle. Visitors can already start getting curious by watching the Snow Globe through the large periscope made from brass in the center of the forecourt. 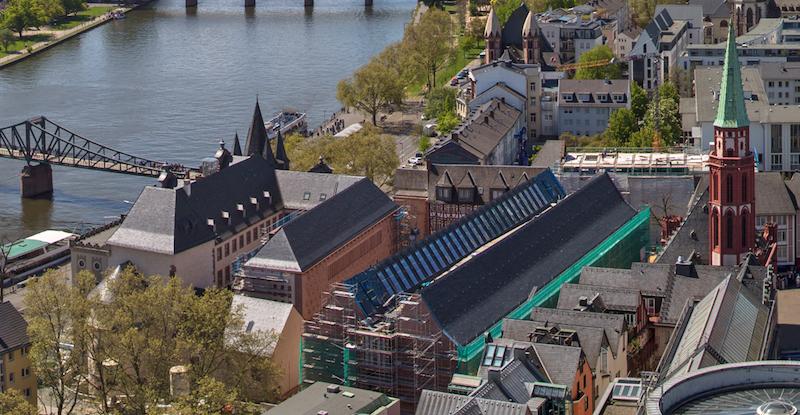 Just like its own district, the new Historisches Museum Frankfurt has many houses, courtyards and a large public square

The Historisches Museum occupies several buildings between the Main riverbank, the Saalgasse and the street named Fahrtor. The museum owns an 800-year-old monument made up of five buildings: the Saalhof at the Mainkai. The new-build (completion in 2017) adds an entrance building, a large exhibition house and a museum forecourt to this. Together, the buildings comprise a new Museum Quarter in the historical centre of the city. Just like a city neighbourhood, the Museum Quarter has several buildings from different construction phases, a public square and various courtyards that divide up the space. This means that the newly designed city museum is able to express and depict an important topic through its buildings alone – the history and present of the city of Frankfurt. The large exhibition space – measuring nearly 6,000 square metres – is separated into five buildings and nine different exhibitions. Our visitors are able to get closer to the history of Frankfurt via the 800-year-old buildings or can be guided by the thematic exhibitions. However, the museum cannot be experienced in its entirety in a single visit – something the Historisches Museum Frankfurt has in common with its city.