21 - Memories of Growing Up
Video installation by Mats Staub

The Swiss artist and story collector Mats Staub explores how world history is mirrored in personal memories. For his video installation „21 – Memories of Growing Up“, he interviewed more than 170 people of different ages and from different parts of the world about their memories of transition to adulthood. He talked to kebab salesmen, actresses, butchers, barbers, escapists and immigrants, retirees and young people in Frankfurt, Bern and Belgrade, Vienna and Weimar, Groningen and Johannesburg. He recorded their stories. When he visited the interviewees again three months later, he played their condensed audio recordings back to them and filmed the reactions on their faces. The responses range from chuckles to tears, gestures of pride to visible immersion in thought. As a video installation, 21 presents the narrators as listeners to their own memories. 21 was first on view at Frankfurt’s Mousonturm in 2012 and will now be on view in expanded form at the Historisches Museum.

The interview partners are not celebrities but “completely ordinary” people. As you listen, you notice that they haven’t already told their stories a hundred times before; their memories don’t come out in well-rehearsed sentences. As you watch, you see the interviewees searching for words, structuring and assessing their memories, and you thus take part in their biographical work. And what you see is not people telling stories from their pasts, but people listening to themselves tell stories from their pasts.

Frankfurt Jetzt! is the ideal setting for Mats Staub’s video installation. After all, here the concern is with the relationship between the subject and the collective, memory and history. The memories of growing up aren’t limited to people’s personal life stories, but also very often mirror world history.

Portraits in German, English and French, partially with English subtitles 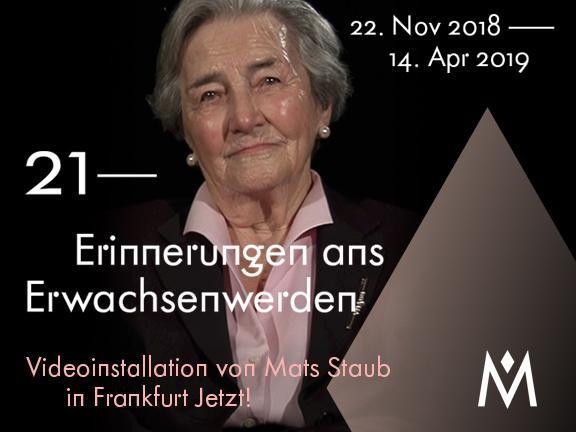 21 - Memories of Growing Up

Watch the trailer for "21" by Mats Staub.